Dark Matter and the Dinosaurs: The Astounding Interconnectedness of the Universe

See other reviews at the Science Shelf

Note: This review was originally published in The Dallas Morning News and is the copyrighted property of Alfred B. Bortz. Individuals may print single copies for their own use. For permission to publish or print multiple copies, please contact the author by e-mail.

Learn more about Dark Matter and the Dinosaurs at Amazon.com.

Sixty-six million years ago, a mountain-sized space rock struck Earth. For the previous 100 million years, dinosaurs had thrived, rising in the Jurassic Period to become the dominant land animals on the planet. Their reign ended abruptly in the environmental catastrophe that followed the impact. They left no successor species other than birds.
To scientists like Harvard Physics Professor Lisa Randall, the real excitement about that event is its scientific backstory. The seemingly outrageous hypothesis of an extraterrestrial impact ultimately proved to be the most plausible explanation of the mass extinction. The key evidence came from a team led by Geologist Walter Alvarez and his Nobel-laureate father Luis Alvarez, who discovered an anomalously high iridium content in a thin layer of clay deposited at that time.

Randall writes in her new book Dark Matter and the Dinosaurs that the scientific method “allows us to think about crazy-seeming concepts, but with an eye to identifying the small, logical consequences with which to test them.”

The quest for knowledge is rarely a direct route. It’s usually a meandering but often challenging hike, and it helps to share it with friends. That’s been Randall’s experience, and this book is her invitation for readers to join her on the trail to a surprising follow-up to the Alvarezes’ work.

Randall studies the theory of the very small–subatomic particles–and the very large, the origin and evolution of the universe. Those two seemingly different realms are actually intimately connected through the Big Bang from which our cosmos emerged.

Her current work centers on the quest to understand dark matter. Normal matter consists of subatomic particles that interact through electromagnetic and two types of nuclear forces to form nuclei, atoms, and molecules. They also carry mass, which, according to Einstein’s general theory of relativity, creates a distortion of spacetime. When enough mass is gathered in one place, that distortion is detectable as gravity.

Normal matter’s properties cause it to interact with and produce light and, more generally, other electromagnetic waves. It can absorb light, reflect light, or refract light. It glows with a spectrum that depends on its temperature.

Dark matter, on the other hand, is oblivious to electromagnetic and nuclear forces. It reveals itself to us by its gravitational effects, which are apparent in the structure of the universe, the internal motion of galaxy clusters (where it was first detected), and the rotation of individual galaxies.

Astonishingly, though we are only aware of dark matter through those massive structures, there is approximately five times as much of it in the universe as normal matter.

But what is it? And what does it have to do with the demise of the dinosaurs? That is where the meandering begins. After beginning the book with questions of dark matter and its relationship to our galaxy, Randall’s narrative diverts in what appears to be a completely different direction.

She writes about the formation of our solar system, life on Earth, and how long-period comets originate in the distant Oort cloud. She explains why astronomers think that those comets, rather than asteroids or short period comets that come mainly from the Kuiper Belt (home of Pluto), are most likely the source of major impact events. And she explores the tenuous but credible evidence that both mass extinctions and increased cosmic impacts occur at periodic intervals of roughly 30 million years.

Then she returns to her latest work and its unexpected connection to the doomsday comet. She and her colleagues have developed a model of dark matter that suggests that some of it would concentrate within a thin disk aligned with the plane of the Milky Way Galaxy. Whenever the solar system’s up and down motion took it through the galactic plane, the excess of dark matter could induce a greater than average influx of Oort cloud comets.
That passage through the galactic plane occurs at roughly 30 million year intervals. It was happening 66 million years ago.

Is that timing coincidental, or did dark matter unleash the dinosaur-doomsday comet? A soon-to-be-launched spacecraft called GAIA will study the distribution of mass of the galaxy. No one planned for it to address that question, but it may soon tell us whether that crazy-seeming hypothesis is worth pursuing further.

Physicist Fred Bortz is the author of numerous science books for young readers, including an updated Kindle version of 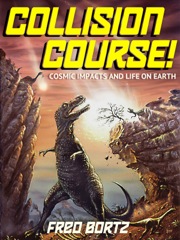 Collision Course! Cosmic Impacts and Life on Earth available in English and 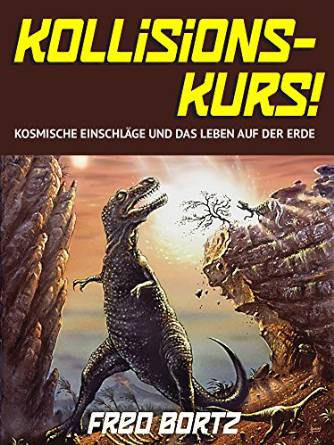 1 thought on “Book Review: Dark Matter and the Dinosaurs by Lisa Randall”