News about the Science Shelf archive of book reviews, columns, and comments by Fred Bortz

I operate on the philosophy that my readers like variety in their books as much as I like to review a broad range of books about or related to science. My past few months of reviewing certainly illustrate that point.

I’ll start with a reminder of a book that got a lot of attention and promises to be very influential as Congress considers education reform bills. If you are the kind of citizen who writes to your representatives in congress and senators, please make sure you read

The Death and Life of the Great American School System: How Testing or Choice are Undermining Education by Diane Ravitch. Clicking the book cover takes you to my review. If you’d prefer to follow this direct link to the book at Amazon.com, be sure to look at the most recent customer reviews, where you’ll find one called “Intriguing and Informative, Regardless of Your Political Stance” by Science Shelf reader Dan Murphy, who is a family physician and school board member in Oregon. Without stating his personal position on Ravitch’s conclusions, he makes a powerful case for everyone involved in the educational enterprise to consider what she says.

I engaged Dan in a bit of conversation there (follow the link to comments at the end of his review), and I’m sure many of you have some thoughts you might like to add.

I’ve written reviews of four books since the last newsletter. All have important points to make. One is compelling and serious speculation about the future of our planet, and the other three are entertaining as well as fascinating.

In my review of

The Flooded Earth: Our Future in a World Without Ice Caps, I take author Peter D. Ward to task, not for the science but rather for the way he presents it. His readers appreciate his provocative style that leads in challenging directions, but, to quote my review:

This time Ward may have allowed speculation to carry him farther than most readers will be willing to go.

The problem won’t be the writing or the subject matter. Ward’s narrative skills are a strong as ever. His readers accept that human activity has increased atmospheric carbon dioxide and, consequently, has set the planet on a path toward a very different climate.

They understand that the greatest and least predictable effect will be the melting of the polar ice sheets and the consequent rise in sea level.

They will also accept his scientific argument that looking at the geological record can shed light on the likely consequences of a rapid rise in CO2.

So they will accept his main premise: “The greatest single scientific question–and for our society, a question of life or death–is how far and how fast the seas will rise…. It doesn’t take much of a change in climate conditions to edge us from manageability into catastrophe.”

The problem is likely to be the way Ward chooses to describe that catastrophe. He presents a series of speculative vignettes of life at various low-lying locations from Miami to Venice to the Netherlands to Bangladesh, as the level of atmospheric CO2 and the oceans rise. Implicit in this future history is that “the very nature of politicians and the people they serve mitigates … proactive response to climate change.”

Even though the review is critical, I hope it draws readers to Ward’s vitally important subject matter.

Was Ward wrong to take that approach, or was I wrong to criticize him for it? While you ponder that, you might also ask yourself what’s wrong with being wrong once in a while. That will lay the groundwork for a very different reading experience,

Being Wrong: Adventures in the Margin of Error by Kathryn Schulz. My review notes:

Imagination, illusion, and humor are just a few of the human traits and abilities that, according to Schulz, are intimately connected with being wrong. Without flubs, missteps, gaffes, blunders, illusions, misperceptions, misapprehensions, and clinging to mistaken beliefs (until we correctly or incorrectly believe otherwise), we would not truly be human.

Readers will find tasty tidbits in every chapter. One striking insight is that “we can’t talk about error in the first person present tense. The moment in which we can logically say ‘I am wrong’ simply doesn’t exist; in becoming aware that a belief is false, we simultaneously cease to believe it.”

You won’t go wrong giving this book a try.

Here’s Looking at Euclid: A Surprising Excursion Through the Astonishing World of Math by Alex Bellos. That link takes you to the Science Shelf version of a review that includes an arcane limerick, which the book review editor of the Dallas Morning News decided to cut. He was probably right, but then his readers are probably less math-savvy than you are.

Finally, I have submitted my review of Mary Roach’s fourth book,

Packing for Mars: The Curious Science of Life in the Void. Until the book has been officially released, that link will take you to a page with links to my reviews of the author’s previous books and a single sentence review: “Roach’s fans will not be disappointed.” Translated, that means you will laugh a lot and learn a lot about the challenges of launching flesh-and-blood, food-eating, waste-eliminating, hormone-driven, fallible, gravity-dependent human beings for a space voyage that will last for several months before arriving at an unearthly destination. And you thought rocket science was hard!

I have just finished reading

The Grand Design, an upcoming book by Stephen Hawking and Leonard Mlodinow. I’m still pondering what to say about it in my review. In any case, I’ve granted exclusive rights to that review to the Philadelphia Inquirer through September 12, 2010. At that point, you’ll be able to find a review at The Science Shelf. (The link in this paragraph points to a page at Amazon.com for ordering the book.)

Massive: The Missing Particle That Sparked the Greatest Hunt in Science by Ian Sample. There’s a chance that the book may already be slightly dated when it appears in November, depending on what happens at Fermilab in llinois and the Large Hadron Collider, which straddles the Swiss-French border deep underground. Still, its main themes promise to hold up nicely. The blurb on the back cover of the advance reading copy describes it as “A prize-winning science writer’s history of the 40-year search for the Higgs boson and the intense rivalries, clashing egos, and grand ambition that led to the brink of a world-changing discovery.” Stay tuned for my assessment of how well Massive lives up to its publicity.

I’m also planning to write a review “on spec” for a title that looks like too much fun to pass by,

Zero: The Biography of a Dangerous Idea and

Alpha and Omega: The Search for the Beginning and the End of the Universe. If the review turns out well, I have a commitment from one of my favorite book review editors to take a serious look. But even if my review isn’t published in a newspaper, I’ll post it at the Science Shelf.

A Point of Personal Privilege

We all have charities that we support, but we often respond to requests from people we have “met” online through blogs or social network sites. If you have been touched by cancer and make occasional donations to the American Cancer Society, I would appreciate if you consider helping my son reach his goal for 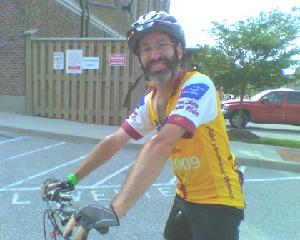 the Pan Ohio Hope Ride. The picture shows him at the end of the 2009 event after biking about 320 miles from Cleveland to Cincinnati over four days. Even if you encounter this page after the 2010 event is completed, the additional donations will help families by giving them free or affordable lodging in one of those two cities’ Hope Lodges while loved ones are undergoing cancer treatment. FYI, my son is the elementary science teacher at the Canton (OH) Country Day School.

A Sampling of my In-Box

As has become my custom, I am happy to share a list of books that look interesting, despite the fact I have no room on my reviewing plate for them. I’ve even included one that I would be predisposed to view negatively (after all, some of you might view it with great interest). The author argues that modern physics is not complete without the philosophy of Objectivism (Ayn Rand’s idea that never dies, though many of us wish it would). I’ll let the covers and titles speak for themselves, even that one. They are listed in order of publication date.

On Fact and Fraud: Cautionary Tales from the Front Lines of Science by David Goodstein (author of Out of Gas: The End of the Age of Oil)

How It Ends: From You to the Universe by Chris Impey

Girls on the Edge: The Four Factors Driving the New Crisis for Girls-Sexual Identity, the Cyberbubble, Obsessions, Environmental Toxins by Leonard Sax

Quantum: Einstein, Bohr, and the Great Debate About the Nature of Reality by Manjit Kumar

The Art and Politics of Science by Harold Varmus

Pavlov’s Dog and Schroedinger’s Cat: Scenes from the Living Laboratory by Ron Harre’

The Pythagorean Theorem: The Story of Its Power and Beauty by Alfred S. Posamentier

The Wave Watcher’s Companion: From Ocean Waves to Light Waves via Shock Waves, Stadium Waves, and All the Rest of Life’s Undulations by Gavin Pretor-Pinney (author of The Cloudspotters Guide: The Science History and Culture of Clouds)

The Shallows: What the Internet is Doing to Our Brains by Nicholas Carr

The Price of Altruism: George Price and the Search for the Origins of Kindness by Oren Harman

The Logical Leap: Induction in Physics by David Harriman 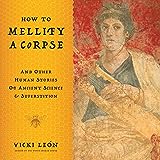 How to Mellify a Corpse: And Other Human Stories of Ancient Science and Superstition by Vicki Leon

Delusions of Gender: How Our Minds, Society, and Neurosexism Create Difference by Cordelia Fine

The Smart Swarm: How Understanding Flocks, Schools, and Colonies Can Make Us Better at Communicating, Decision Making, and Getting Things Done by Peter Miller

In past newsletters, I have offered my thanks to the growing number of people who are kind enough to buy some of the books that they discovered here through the Science Shelf links. Many use the link on the Science Shelf homepage to enter Amazon.com every time they shop for books or other Amazon products (someone just bought some pet supplies). It’s their way of thanking me for these archiving these reviews and occasionally publishing reviews by other people with varying points of view.

I never know who’s buying, only what they bought. Sometimes their purchases prompt me to look at the same books. Sometimes a shopping list indicates my website is a useful entry point for a topic of interest, such as space and astronomy.

I’ll repeat a standing offer to thanking you for your support. If you want to order some of my books directly from me, I may be able to offer a substantial discount on a few titles where I overbought. Just send me an e-mail through my “Dr. Fred’s Place” home page and I’ll let you know if I have the titles you are interested in.

As I have often said, I don’t expect Amazon.com commissions to cover the time I spend maintaining the archive of book reviews and writing messages like this. (The past two months have not brought much business, which may mean that I need to send more newsletters. Or it may just be the general summer slowdown for science books.) Still, I am grateful that the number of purchases has been growing slowly on the whole. The Science Shelf is still a labor of book- and science-love, and your click-throughs still tell me you appreciate it.

As always, happy science reading, and thanks in advance for your support!