If you are not a physicist, you may be asking yourself why so many science reporters are suddenly abuzz about gravitational waves and the phenomenon known as Cosmic Inflation. Perhaps this blog post can help answer that question.

As an author of nearly 30 science books for young readers, I may be well equipped to simplify and clarify both without losing too much depth. If you want more after this, I recommend this link from Stanford University, which includes a video of a key scientist, Andrei Linde, getting the news in person from one of his colleagues.

Let’s start with the idea of Cosmic Inflation, which is represented by the lower portion of the Stanford University graphic below. The horizontal axis is time from the Big Bang, which is at the extreme left end. The vertical spread represents the size of the universe. 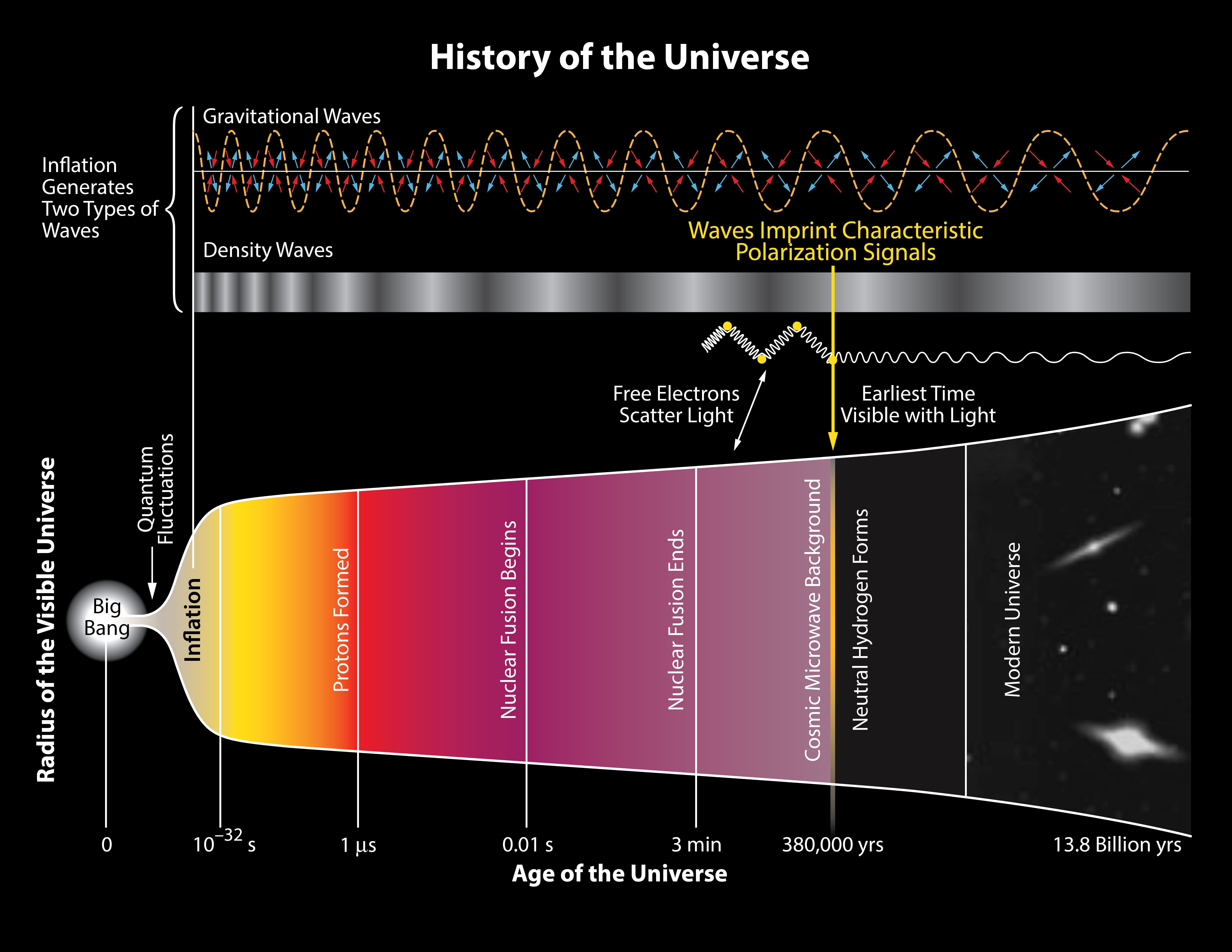 As proposed originally by Stanford Postdoctoral Fellow Alan Guth (now a professor at MIT), inflation happened less than 10-32 seconds after the Bang Bang. At that point, the universe abruptly inflated faster than the speed of light would permit. The explanation is that space-time itself emerged from the Big Bang, and it was space-time rather than matter or energy that inflated.

Inflation is needed to solve a cosmic puzzle. When we look at deep regions of the universe in opposite directions, we are seeing parts of the universe that are too far apart to have communicated with one another, even with signals that travel as fast as light. Yet somehow, they are at the same temperature; that is they are in thermal equilibrium. Inflation explains how that can be possible. The entire universe was in thermal equilibrium in the tiny bit of time before inflation began.

The idea of that faster-than-light inflation did not sit very well with some physicists, who wanted observations that directly showed evidence of the inflationary event. The upper part of the graphic helps explain that evidence. According to Einstein’s General Theory of Relativity, changing the distribution of mass or energy in space creates ripples in space-time known as gravitational waves. Linde, then living in Russia, proposed that if the gravitational waves created by inflation could be detected, they would reveal details of that brief but critical period in the history of the universe. A remarkable collaborative observation of the Cosmic Microwave Background in a project known as BICEP2, has done precisely that.

I predict that this discovery, if confirmed, will win a Nobel Prize for Physics for Guth and Linde very soon–if not the next one, then the one after that. No wonder this announcement is creating such a buzz!

ADDENDUM: Confirmation seems to be unlikely, given that serious doubt has now been cast on these results. See this article in Scientific American for a clear explanation of why dust may be responsible for the BICEP2 results.