I don’t usually post news releases, but this one caught my attention because I wrote 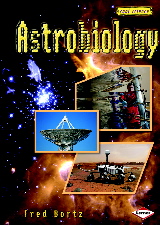 a book for young readers about the “Cool Science” of Astrobiology. A satellite with the delicious name of O/OREOS will be paving the way for serious testing of an important question in the study of life in space and on other worlds.

My book does not discuss the panspermia hypothesis, which suggests that life on one planet or moon could hitch a ride to another world on a meteorite. But some of my readers might ask themselves about that possibility.

Up to now, panspermia remains a hypothesis with little evidence that organic molecules or primitive organisms can survive in interplanetary space. O/OREOS will be a proof of concept for future satellites that will test the survivability of Earth biology in that challenging environment.

INSERT ADDED 11/24/2010. To supplement the news release, have a look at this interesting blog from National Geographic.

The goal of the O/OREOS mission is to demonstrate the capability to
conduct low-cost astrobiology science experiments on autonomous
nanosatellites in space. Scientists will apply the knowledge they gain
from O/OREOS to plan future experiments in the space environment to
study how exposure to space changes organic molecules and biology.
These experiments will help answer astrobiology’s fundamental
questions about the origin, evolution and distribution of life in the
universe.

“It was a spectacular sunset launch as O/OREOS got a piggyback ride
into space on the STPSat-2 mission,” said Bruce Yost, O/OREOS mission
manager at Ames. “We’re off to a great start, having made contact with
O/OREOS with our ground station at Santa Clara University, received
confirmation that the spacecraft successfully deployed and initiated
the first experiment. The amateur radio community also has been
listening to O/OREOS and giving the operations team important
information about the health and status of the spacecraft,” Yost
added.

“The O/OREOS science team is excited to receive the first real-time
measurements from samples onboard two science experiments,” said
Pascale Ehrenfreund, O/OREOS project scientist at the Space Policy
Institute at George Washington University. “This will demonstrate that
CubeSat technologies can be used for future missions to address
fundamental astrobiology objectives.”

Approximately 19 minutes after launch, O/OREOS separated from the
Minotaur IV rocket and entered low Earth orbit at an altitude of
approximately 400 miles. About three hours after launch, amateur radio
operator, Marco Bruno, in Torino, Italy received the first signals
from O/OREOS. After a spacecraft checkout period, O/OREOS autonomously
initiated the first of two experiments, which will last approximately
six months and transmit data for as long as a year. The second
experiment will start on Friday, Nov. 26, 2010.

Now that O/OREOS is activated and has begun transmitting radio signals
to ground control stations at Santa Clara University, the
nanosatellite will send mission data to the NASA Mission Management
and science teams at Ames for analysis.

The Small Spacecraft Division at Ames manages the O/OREOS payload and
mission operations with the professional support of staff and students
from Santa Clara University, Santa Clara, Calif., in support of the
Astrobiology Small Payloads program under the Planetary Science
Division of the Science Mission Directorate at NASA’s Headquarters in
Washington.